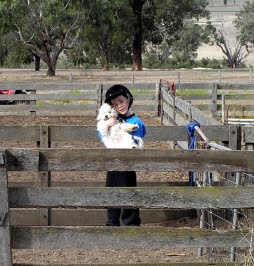 I’m giving you an update on “Judd” our moodle boy who flew all the way to Perth in February to be with us and enjoy the Perth lifestyle.

To start with, he’s just fantastic and a real bundle of personality. He has settled very easily and coped very well with the Perth summer (although if wasn’t much of a summer this year).

He has a big back yard in which he guards as his domain and still hasn’t worked out why the passing felines keep a very safe distance from him. He’s finally got his bark fine tuned, which he uses very rarely and only when he wants to appear big and scary.

Judd loves the water and spent many a summer day lazing in a big bow I had filled up with water in the back yard. He loves to jump in the pool with us (hates being left on the side) and although we didn’t get to the beach I’m sure he’s going to be bounding along the breaks. He passed puppy preschool with flying colours and has become exceptional with his manners. Having trained past dogs its been a real breeze teaching Judd.
He loves human company!!, he has to be near you, sitting on your feet if your standing in the kitchen or at least be within his sight. My son and Judd get on like a house on fire and of course chasey is their favourite game. Half time your not too sure who’s chasing who!! He’s a great car traveler, which makes life very easy considering he goes nearly everywhere with us.

We’re off down the farm this weekend for his first encounter with horses, sheep and lots of open space – he’ll be in his element.

Donna and Steven thank you for sending Judd to us. He’s definitely not short of love and affection and has provided us with many a laugh. I couldn’t have asked for more with his spontaneity in character and gorgeous expressions.

Thought I would pass this on for you to have a look at.

This is the chapter a US publisher are publishing about Moodles (Maltipoos as their named in the US ).

Thank you for passing on my name to them for pictures of Judd.

He has increased his “legend” status once again by outclassing himself enough to have his photo published in a book.