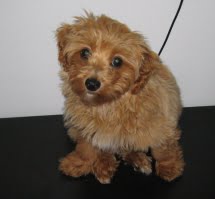 Brandi was one of the puppies from a litter born on 25 March 2009. We had her delivered to Queensland towards the end of May 2009. We particularly chose a maltese x poodle (moodle) as we were looking for a dog that did not drop hair and that was not going to grow too big. She is now 18 months old and we absolutely love her to bits. She has only had basic puppy preschool training but she is extremely well behaved, mostly obedient and became toilet trained within weeks.

We also have a larger dog, Chikko, who is almost five years old. They are best mates and play well together. She also socialises well with other dogs and is gentle around babies and young children. She is apricot in colour, with a little bit of white on her chest and a tiny bit on her paws. Her hair is kind of cool because it looks like it has been sun bleached from being at the beach too much which is appropriate for a dog that lives on the Gold Coast. She doesn’t shed hair like a normal dog but does lose the smallest amount everynow and then, almost the same as people do but nothing that causes any problems at all.

She can be a little timid around new people and it can take her a while to get used to people. As we expose her to more things she is getting better.

We have been very fortunate as she never chewed anything apart from her toys and the occasional magazine which we might have left in reach. She only barks if Chikko is barking, if they are playing or if she hears a strange noise. We couldn’t have been more fortunate with Brandi’s personality and behaviour.

The only thing we really need to work on is, if we at a park and she is off the lead, she doesn’t like to come back. Suffice to say, she doesn’t come off the lead too often unless it is an enclosed park. She has gotten out of the front gate a couple of times and it is quite scary as she has no road sense and will not listen to us. With all that aside, Shell and I can’t thank you enough for Brandi.

The joy she has brought us is hard to express in words. She’s always so pleased to see us when we get home, she does little happy circles and wags her tail ballistically. She loves to play with her ball and toys and let’s us know when she wants to play. When she’s tired, she puts herself to bed which is in a little bed under our bed, but when we go to bed, she sneaks up with us. This is something that we have allowed and are quite happy for her to do.

She gets tossed from side to side and pushed and kicked during the night but she doesn’t care. In the morning when she knows I’m awake (or almost awake) she taps my chest with her paws and makes little grunting noises to try and get me upShe is affectionate, always wants to be around us and loves being cuddled which we don’t mind either.

We couldn’t imagine our home without Brandi, she’s the best mate you could ever ask for!

We would never hesitate in recommending your puppies to anyone.