Kris and the Snell Family 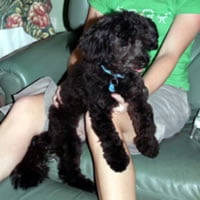 Just emailing about little Toby our Cavoodle. He had his first birthday a few weeks ago as you know and is still as adorable as ever, in fact he is sitting on my lap as I write this email. He has been to puppy preschool and won a prize for being a quick learner.

We’ve been getting him clipped every three months although we think he looks cuter when he’s scruffy but he tends to run into things and fall over more often when he is.

He is energetic and always entertaining. His nickname is Denis because he is a menace escaping frequently through a fence we thought was impenetrable. This week he has tried catching possums and Dad assures me that he did in fact fly, he’s the fastest thing on four legs and impossible to catch when he doesn’t want to be. He is constantly covered in prickly stuff from our garden and he loves being outside, but he is also quite cuddly and sooky. He can also jump extremely high constantly surprising us all and making it difficult to take photos as they quite frequently blur.

TobyHe has the appetite of a Labrador , which we think is due to Sasha our other pup and there is a photo of the two of them attached. He is absolutely spoiled and sleeps on my bed when Sash sleeps outside.

He is friendly and loves all other dogs constantly just wanting to play and make new friends. His favourite position is lying on his back belly to the air and I’ve attached a photo of him doing this.

TobyLately he has also got a little yappy but we’re trying to get him out of this. It seems odd because we can still remember the first time he barked and scared himself.

He weighs 4 kilos, is 25cm from floor to shoulder and his tail is the same length, from nose to bottom he is 48cm.

He fits perfectly in our family and we love him very very very much. He recently won a kleenex competition for being so adorable. Thank you for such a gorgeous little creature!

Kris and the Snell Family November 06