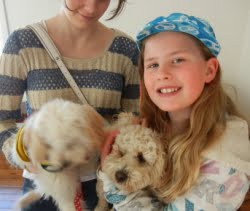 We collected Buddy from you at the Bathurst Tourism Info Centre in June/July 2010 (I think at the time we just called him “Apricot Boy”).

At the time I was still living in Sydney but have since moved back to Orange where my two girls (Paris and Ruby) are at school. Buddy quickly adjusted to the chilly climate, having been Bathurst-born to begin with, and his long, curly, non-shedding coat keeping him warm.

I mostly manage an IT-based company from home, so Buddy is almost never without doting human company and has ‘access all areas’ indoors, meaning that he typically sleeps alongside of me and flits between family members during the night when everyone is home. Buddy is incredibly affectionate, smart (cunning even!) and well-behaved, with a few minor exceptions.

He will bolt straight out the door given any opportunity, mainly to visit his ‘girlfriend’ (a mini-foxy a few doors away and yes, Buddy is desexed) but also to chase cars which means we have to be extremely vigilant. On the leash though, he’s a champion walker and popular visitor at local cafes where he is catered for like a human. He also steals bras from the laundry hamper and takes them into the backyard where he guards them jealously and thrashes them from side to side – especially beige ones – as if they’re a rabbit or something.

It’s also as though Buddy has a sixth sense, meaning on the days when I’m collecting my girls from their Dad, he starts fretting out loud before we even get in the car, then goes quite berserk from his harness in the back seat. How he distinguishes these particular outings from my regular runs to the post office etc is beyond any rational explanation I can think of.

Attached is a photo of Buddy with my younger daughter Ruby, and a Sydney friend who came to visit with her nappy-wearing mini-bitzer (oh, puleez!). Buddy has also been having occasional sleepover visits from a CockBeagOodle friend, and it’s lovely to see them both getting along so nicely together.

Some months ago, Ruby held a very tiny Moodle puppy in a pet shop for a few minutes, and since then hasn’t stopped pestering me to get a Moodle ‘brother’ for Buddy, one that she can be the ‘mother’ of (Buddy being the whole family’s pet). What can I say to such relentless, heartfelt nagging? Except to promise that I’ll try to find her the right puppy.

Ruby has looked around on the internet and decided that a “red” or “dark apricot” Moodle boy would be her wildest dream come true.

We trust you guys as breeders, so please let me know if there is any likelihood of a puppy like the above being born at your place within the rest of this year.