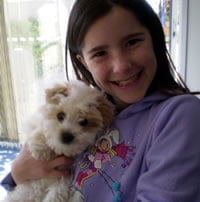 We bought a little moodle boy about 6 weeks ago and met you in Katoomba just to meet him but ended up buying him. We have named him Charlie and he really is a little character. He was born on 28.5.08.

He had his second lot of needles a couple of weeks ago and met his new vet who thought he was so beautiful.

He is such a little charmer.

CharlieHe has settled in great … has a fantastic appetite. We have started giving him the odd chicken wing and loves them. He even eats his worm tablet as if its a liver treat…

When playing with his ball & toy rope he ‘sits’ on command before its thrown.

We still have a few hiccups with house training…gets very excited when he sees us and has a little accident!!

We would like to thank you again for our Charlie. He really does bring us lots of fun and love. We have sent you a couple of updated photos and we will send you more as he gets older.