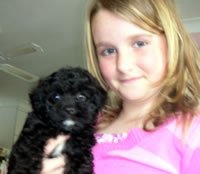 Just wanted to let you know how our little Cavoodle pup is going and what his up to. Barney will be 4 months old on the 25th of January and he has grown much bigger then when we first saw him!

He learns very quickly! He can sit and fetch but still is having problems weeing outside or on his piddle pad. He cried for the first couple of nights but now he sleeps like an angel.

He is a great traveler and had his first long trip to see his cousin Samson who also was bought from you, he is a Chi-poo. They are the best of friends. They both love having each other around.

Barney – NowBarney is very playful and has to be around someone 24-7. He loves all types of people.

Thank you for such a great puppy… we love him to bits.

Just wanted to update our cavoodle feedback page and tell you a little bit more about Barney and what he has done since the other update.

Barney – 5 MonthsBarney will be 5 months old on the 25th of February and is getting his first clip on Saturday. He is also going to be desexed on the 19th of March.

Barney loves going for walks and he walks well on the lead. He is also able to run along beside the bike when the kids go riding with him. Barney is learning how to shake and stay and is getting better at peeing outside.

Barney loves the beach and you can’t keep him out of the water! He still loves all types of people and is pleased to see us when we get home from school or work.

Thankyou again for such a beautiful and a loving puppy!